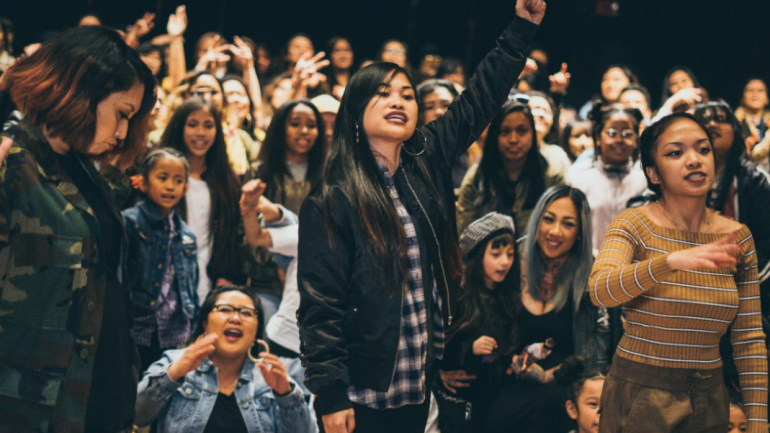 The music video for rapper Ruby Ibarra’s single, “Us,” has been viewed over 150K times since its release two months ago. The lyrical and visual message of empowerment and solidarity among Filipino American women made for a statement that many are finding powerful.

For Ibarra, “Us” is her favorite song off her CIRCA91 album. She was very happy with it, especially with the inclusion of artists Rocky Rivera, Klassy, and Faith Santilla on the track. What she didn’t expect was for how much the song would resonate with listeners.

“Fast forward seven months after the song’s initial release, now, ‘Us’ means more than just a song to me,” she said. “‘Us’ is sisterhood, affirming your identity, and celebrating both the past and where we want to go.”

For Evelyn Obamos, co-director of the behind-the-scenes documentary, NOTHING ON US: PINAYS RISING BEHIND THE SCENES, she considers the song a Pinay anthem; its resonance being similar to that of Beyoncé’s “Lemonade.”

“I think ‘Us’ has been the song of my life,” she stated. “It reflects so much on an experience that often goes untold. So when I first heard it, it just felt like someone was validating me and when I notice that other people were also feeling the same way about this track, there’s obviously this energy that comes with it.”

Ibarra already had in mind for what the music video would involve as she was writing the song, and was working with Burgundy Suite on a number of her other music videos. But after meeting Obamos through a mutual friend, her DJ, Mister Rey, and learning that she is a videographer, Ibarra started thinking about how to get her involved in her projects. Remembering MTV’s MAKING THE VIDEO segments from her childhood, the idea for a documentary, which she also co-directed, came to mind.

“She really wanted it to be my project as much as it was hers,” Obamos explained. “From the get-go, she emphasized that, and I found that to be so meaningful, because a storyteller can approach it many ways and to have that shared dialogue is not always easy. But the fact that she acknowledged, ‘This is yours as much as it is mine,’ just felt like I got creative autonomy to do what I felt was a good story to tell.”

Being the director of both the music video and the documentary, as well as the subject of both projects, Ibarra learned a lot from the experience. Having an extensive attention to detail and maintaining timeliness were major lessons when it came to directing the music video.

“From the standpoint of creating the documentary, I learned that it can be quite a challenge to capture everything, especially when you’re in the moment and you’re also a subject of the film itself – sometimes, it was challenging for me to remember which shots we needed to make sure we got,” she expressed.

Obamos shoots weddings on the side, and is adept to being consciously aware of how she could possibly wind up in a photographer’s shot. Communication is key for her to keep the visuals as professional as possible. She stated how the producer and the P.A. for the music video were easy to work with, especially as they all had the same goals in mind in wanting to create something beautiful.

“I would walk into different scenes while they were actually shooting it,” she noted. “I was actually all around the floor, trying to get my shot.”

Looking over the documentary now, both are amazed by the movement that this song has started.

“What I love about the age we’re in is that conversations extend beyond platforms,” Obamos elaborated. “They extend into your everyday conversations and I think that’s really what the power of social media is. That distribution that we never had on television, on radio where we as creators have access. We’re agents of the message we’re trying to elevate, and I think when people are hearing that message, they also want to extend it.”

They are also both grateful for everyone who helped make the music video happen; from the officials who allowed them to shoot at Balboa High School for free, the crew, the gaffers, dancers, volunteers, anyone who assisted via social media, and the hundreds of extras who appeared in the final product.

“The shots serve as a reminder to how many people truly wanted to help create the music video,” Ibarra added. “To emphasize this, I want to note that we put out a casting call for at least 100 extras to show up by 1:00 PM, and at 11:00 AM that day, we already had nearly 150 women waiting for the scene!

“I now believe that the song was aptly named – this song is not about me, this video is not just for the artists in the song, this entire process and project was for all of us – everyone involved and everyone who watched it and was impacted by it.”