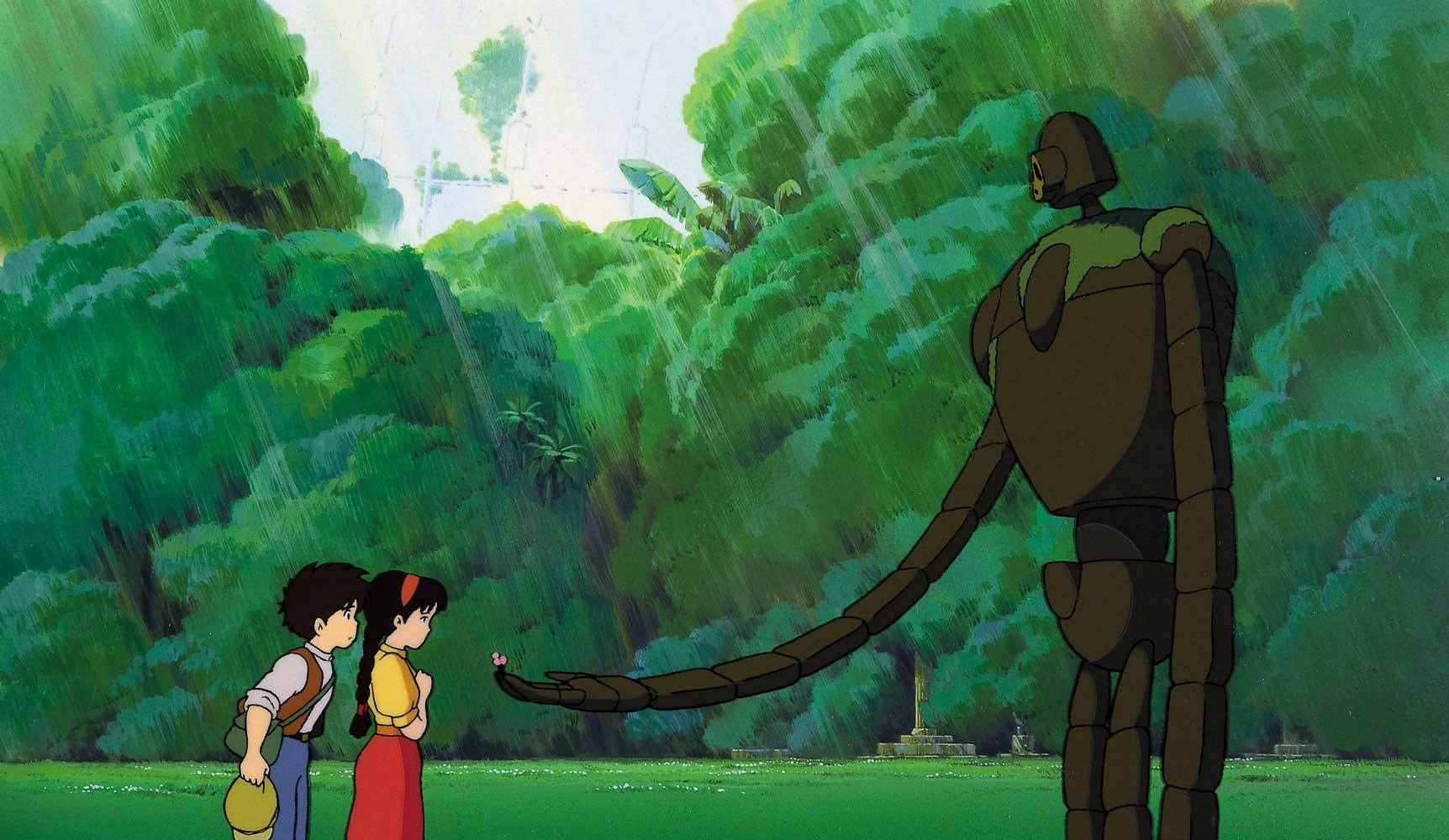 I was kicking myself in the butt yesterday when I realized that Tuesday was the 30th anniversary since the release of CASTLE IN THE SKY. From famed film director Hayao Miyazaki, it is significant in that it is the first film to be produced and released by Studio Ghibli (which he co-founded).

It tells of two young orphans – one of whom with a mysterious magical crystal – as they go in search of the floating city of Laputa. Along the way, they deal with a gang of sky pirates and a corrupt government agent who are constantly at their tale.

CASTLE IN THE SKY sets in stone many themes that would eventually appear in several of Miyazaki’s films as time went on: man’s relationship with nature and technology, headstrong female characters, the power of flight, and ambiguous creatures. The creatures in this case are the robots of Laputa.

While we see several of them throughout the film, I am most curious about the one that’s protecting the garden on Laputa. As revealed over the course of that scene, it is the only functioning robot left protecting the garden, as all the other ones have shut down. In top of that, with all the humans gone for the past several centuries, the robot’s companions are found in the various creatures of Laputa.

That scene makes me think back to how as a teenager, I once theorized how CASTLE IN THE SKY may have served as some inspiration for the Disney/Pixar film, WALL-E. We find our hero, Wall-E, in a similar circumstance at the beginning of the film. He is the only functioning robot left on Earth, after all the humans have abandoned the planet several centuries before, due to the lack of sustainable living conditions. As a result, he befriends the creatures – or rather, a creature – of the planet; in this case, a cockroach.

While Pixar has never said otherwise about whether it drew inspiration from CASTLE IN THE SKY for this particular film, even if my theory proved correct, it’s definitely plausible. Apart from Disney translating many of Studio Ghibli’s films into English, John Lasseter, the chief creator officer of both Pixar and Disney, is a long-time friend of Miyazaki.

Again, I wouldn’t jump the gun on what is just an innocent theory conceived during my adolescence. If anything, it just goes to show that great minds think alike. What breaks the similarities is how these respective robots are used in both of these uniquely individual stories. While the robot on Laputa is an asset to what the floating island once was prior to the humans abandoning it, Wall-E is the protagonist of his own story.

At the end of the day, one thing that we can confirm – as far as a mesh between Pixar and Ghibli goes – is that Totoro plush in TOY STORY 3 most certainly did not just come out of anywhere.

In any case, I figured it be fun to share this old theory of mine, as we celebrate 30 years of Studio Ghibli’s first film, CASTLE IN THE SKY.